Poconos Pocono Mountains: Scranton: These as well as many other buildings you will see while viewing these documents stand today, looking much as they did 80 to 100 years ago! Tour 1 of Scranton PA


This view of Scranton from the early
1900's looks much the same today! 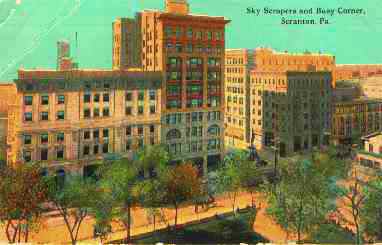 Little of Scranton's skyline has changed from the turn of the century. Part of the charm of Scranton is that it is as though the city was frozen in time as Houdini was in "The Man From Beyond". 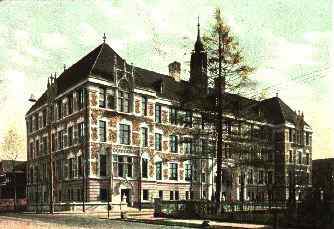 What were Scranton's skyscrapers around the turn of the century
are now special because of their hometown flavor. 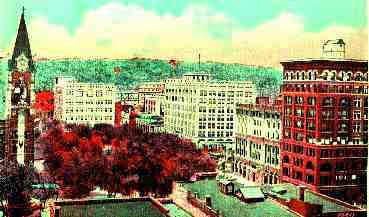 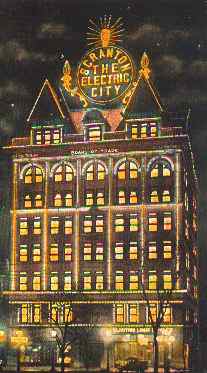 An open market used to operate
where the new Mall now stands. 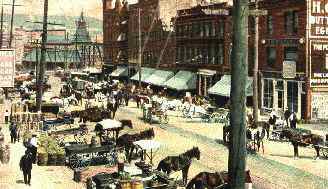 This wonderful building was once the home of
International Correspondence Schools.
It still stands downtown!
ICS has since built a modern
facility in the outskirts of the city. 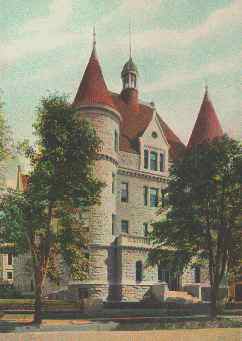 Another Large School, North Scranton Jr. High School,
recently closed, is located on Main Avenue,
just about a block from The Houdini Museum.

Scranton was the first city to run regular trolley service and was one of the first to have a totally electrified transit system. In fact New York city had horse drawn cars some twenty years after they were eliminated from Scranton. The trolleys were made locally as were many railroad locomotives.

Miners wives worked in some of the finest textile mills in the world including Scranton Lace that to this day is one of the leading lace makers in the world. During the industrial revolution the railroad industry used more iron than all other users put together. Because of the tremendous commerce this brought here, the area became known as Scranton. Scranton was so popular that he was elected to congress as a Republican in an area that was almost totally Democratic. The Anthracite Strike of 1902 was one of the great events in American labor history. The well intentioned Sherman Anti-Trust act of 1890 prohibited "combination in restraint of trade" which was written to stop industrial monopolies, but was used more against unions until 1902. Those who fought the unions with violence were mostly not punished. In 1897 in Lattimer the sheriff of Luzerne County had his men shoot into a crowd of protesting miners. They wounded 49 men and killed 19 and yet no one was ever put to trial. All levels of government as well as the Roman Catholic Church were adamantly opposed to union organization. Rome even had a ban against union membership until thanks to the urging of Cardinal Gibbons of Baltimore and Bishop Hoban of Scranton. All this would change under the leadership of one John L. Mitchell who became the 5th president of the United Mine Workers in 1899 at the young age of 29. He won a 10% pay increase. Then asked a 20% increase, an eight hour day and other improvements. Hence the strike of 1902 It turned out to be the longest strike in the history of coal mining. It was the largest and longest labor action in the world up until that time and the most important strike in American history. The owners of the mines called themselves "Christian men to whom God in His infinite wisdom had give control of the property interests in this country!" It was these same coal barons that did not allow Henry Ford to bring the automobile industry to Scranton, that would have changed the course of history for the city. The workers sustained a $25 million dollar loss, an unthinkable amount of money in those days. President Roosevelt had to force the owners to sit down face to face with Mitchell. Never before had a president been forced to step in to help solve such a situation. Mitchell won many concessions and it was the most important union success in history. Scranton's Courthouse Square has the typical monuments to presidents and soldiers, but the largest of all is the monument dedicated to the memory of John Mitchell. All manner of legislation would be passed to protect miners including a law that made it necessary for every mine foreman to take long difficult tests of their knowledge of mining procedures and regulations. The one book that had all the information they need to study was written by Thomas J. Foster from Scranton. He was so successful that he set up a correspondence school for miners. In 1901 he merged with his publisher and International Correspondence Schools was born. Most people who see ads in the back of magazines, comic books and Sally Struthers on TV do not realize that the ICS is located in Scranton, and has had millions of mail order students from throughout the world. Luna Park, one of the showspots of the entire east coast went up in flames in 1916, never to be rebuilt.

Scranton History. Historic Jewel of the Pocono Region.
Go to

© 1989-2003 by MagicUSA. Except for reviews, no part of any of this document may be reproduced in any form, without written permission by the authors. The graphics have been retouched, computer enhanced and resized by the authors.